Eastern would start the scoring in the 29th minute with Senior Cassie Smith would score get first of the match to give the Colonels a 1-0 lead.

Cassie would strike again in the 53rd minute to give the Colonels a 2-0 lead. That goal would put her as the highest goal scorer in EKU history with 18 career goals.

Kayla Childs would put the ball in the net for the second time this season to put EKU up 3-0.

Emmi Carroll jumped on the scoring bandwagon in the 87th minute for the 4-0 win.

Eastern has not given up a goal in 462 minutes of action.

Colonels will return to the pitch on October 7th at 8 pm at Austin Peay. 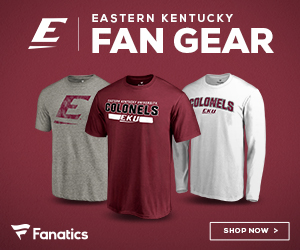 Colonels Close Out Season with 1-1 Draw at Tennessee Tech

Despite the COVID-19 changes, this decision does not include football at this time due to existing contractual matters. BRENTWOOD, Tenn. – The Ohio Valley Conference Board of Presidents has reiterated its intention for the Conference to commence competition this fall...