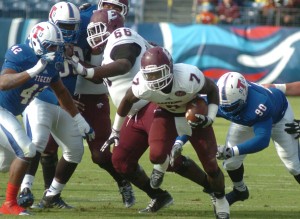 Mobley proved to be a difference maker for Eastern Kentucky after transferring from the University of Kentucky, as he helped the Colonels earn its 21st NCAA Division I Playoff appearance and first since the 2011 season. The junior ranks fifth nationally in rushing touchdowns (19), sixth in scoring (10.0 points/game), 11th in rushing yards (1,395), 13th in rushing yards/game (116.3), 21st in rushing yards/carry (5.91) and 22nd in all-purpose yards (138.83 yards/game). A finalist for the Walter Payton Award, Mobley tied the OVC record for touchdowns in a game when he scored six (five rushing, one receiving) in a victory over Murray State; he finished that game with 324 all-purpose yards (the fifth-highest total in the FCS this season), including 224 rushing and 100 receiving yards, on his way to National Player of the Week honors. Mobley produced eight 100-yard rushing games this season (the most in the league), scored multiple rushing touchdowns in five contests and ranked third on his team with 30 receptions. His 19 rushing touchdowns are the third-most in OVC single-season history, his 120 points are the fifth-most and he needs just 148 rushing yards to move into 10th place in league history. Mobley is the 11th Eastern Kentucky player to be named OVC Offensive Player of the Year and first since quarterback Allan Holland took home the honor in 2007. He joins a group of three other EKU running backs to win the award including Everett Talbert (1974 and 1976) Elroy Harris (1988) and Markus Thomas (1991 and 1992).

The All-OVC first-team was highlighted by Mobley at the running back position. He was joined by Jacksonville State senior DaMarcus James who earned his second-straight All-OVC first-team accolades. Despite missing a game James rushed for 1,023 yards in 10 games and ranked second in the OVC and 18th nationally with 13 rushing touchdowns. The All-American now has 48 career rushing touchdowns which ranks fifth in OVC history. The first-team quarterback is Jacksonville State sophomore Eli Jenkins who had another solid season after a breakout FCS Playoffs in 2013. Jenkins passed for 1,617 yards and 11 touchdowns and rushed for 614 yards and five scores in leading the Gamecocks to a 10-1 record and the nation’s fourth-ranked offense (510.5 yards/game). The wide receiver position included Eastern Illinois senior Adam Drake and Southeast Missouri State junior Paul McRoberts. Drake capped his career by ranking sixth in OVC history in career receptions (202) and receiving yards (2,979) and ninth in career receiving touchdowns (26). This season his 1,321 receiving yards are the most in the FCS, his 110.1 yards/game average ranks fourth and his 7.8 catches/game is fifth nationally; his 93 catches in 2014 are the fourth-most in OVC single-season history. Despite missing five games due to injury McRoberts made a huge impact for first-year Southeast Missouri State coach Tom Matukewicz. The junior caught six touchdowns in the first four games of the season including the game-winner as the Redhawks topped No. 3 Southeastern Louisiana in September; he returned to the field in November and caught three more touchdowns and tallied a pair of 100-yard receiving games. Eastern Illinois senior Jeff LePak earned his second consecutive first-team All-OVC honor at tight end after catching 30 passes for 321 yards and a touchdown. The first-team offensive line included a pair of Jacksonville State players in senior center Max Holcombe (a repeat first-team selection) and junior guard Adam Wright. The team also included Eastern Illinois senior guard Collin Seibert (who earned his third-straight first-team All-OVC honors), UT Martin senior tackle Charles Sweeton and Eastern Kentucky junior tackle Brett Eyckmans.

The first-team All-OVC specialists included three first-time honorees in Southeast Missouri State sophomore kicker Ryan McCrum, Jacksonville State junior punter Hamish MacInnes and Murray State junior return specialist Pokey Harris. McCrum was the only kicker in the FCS to kick four field goals of 50 yards of longer this season, connecting from 55, 54, 52 and 51 yards (the 55-yard was the third-longest nationally). Overall the sophomore, who ranks fifth nationally in field goals/game (1.5), made nine field goals of 40 yards or longer while four of his five misses came from 43 yards of longer. MacInnes averaged 39.5 yards/punt including a long of 58 yards, had six punts of 50-plus yards and 14 that were downed inside the opponent’s 20-yard line. Harris ranked sixth nationally in kickoff returns, averaging 28.8 yards/return, and returned three kicks for touchdowns, which led all FCS players. In back-to-back weeks he returned a kickoff 100 yards for a touchdown, becoming just the third player in OVC history to have multiple 100-yard touchdown returns in a career (and one of just 12 total 100-yard kickoff returns in league history).

Eleven players were selected to the All-OVC Newcomer squad; to be selected to the team an individual had to be a first-year player (freshman or transfer) in the OVC. One of the selections was JSU’s Lea, who was the OVC Freshman of the Year and a second-team All-OVC pick. The squad also included seven other players who were either first or second-team All-OVC selections including EKU’s Mobley (Offensive Player of the Year and first-team running back), JSU’s Sigler (Defensive Player of the Year and first-team defensive lineman), Fanning (first-team defensive lineman) and Brummel (second-team tight end), EIU’s Whitlow (second-team quarterback), TSU’s Terry (second-team defensive line) and TTU’s King (second-team punter). The remaining All-Newcomer selections included Eastern Illinois freshman kicker/punter Nick Bruno (14-of-16 FGs, 44-of-45 PATs, 34.7 yards/punt), Tennessee Tech freshman wide receiver Brock McCoin (43 catches, 517 yards, 2 TDs) and UT Martin junior linebacker Nick Dance (56 tackles, 5.0 TFL, 2 FF).

Note: The All-Newcomer team is comprised of first-year players in the OVC – that can be either true freshmen, redshirt freshmen or first-year transfers. The team consists of 11 total players and is not voted on by position. 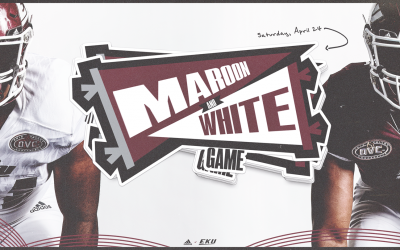 A lack of depth at key positions due to injuries and continued adherence to COVID-19 protocols will limit the ability to conduct Maroon & White game. RICHMOND, Ky. – The Eastern Kentucky football Maroon & White game scheduled for Saturday has been canceled. In... 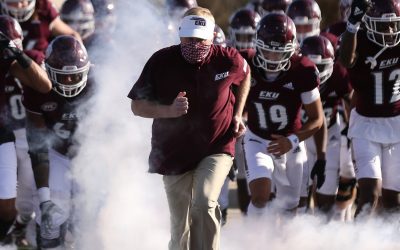