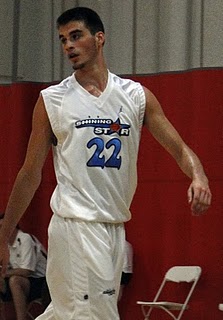 The Eastern Kentucky men’s basketball team picked up its second verbal commitment in less than a week Sunday.
Elliott County’s Timmy Knipp, considered one of the top power forward prospects in the state, verbally committed to play for the Colonels on Sunday. George Rogers Clark standout Robbie Stenzel, one of the top guards in the Class of 2011, made a verbal commitment to play for Eastern last week.
Knipp (6-foot-7, 185), was the state’s leading scorer last season, averaging 30.8 points per game. Knipp can shoot the three and also can attack the basket. Knipp can also dominate. Knipp scored 45 points in a win over West Carter in the 62nd District Tournament.
In that contest, Knipp scored 28 points in the second half and was 10-for-10 from the free throw line and scored 15 of the Lions’ 17 points in the third quarter.
Knipp chose the Colonels over Akron, Marshall and  Tennessee Tech.
Knipp helped lead Elliott County to a 20-8 record last season. The team lost to Fairview in the semifinals of the 16th Region Tournament.

Mayo Voted OVC Freshman of the Week for Third Time

Colonels give Kansas a scare but fall short