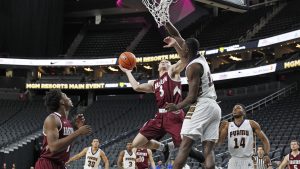 Junior Nick Mayo matched his season-high with 25 points, to go along with six rebounds and three assists. Sophomore DeAndre Dishman added 13 points and five boards for the Colonels.

EKU (2-2) outshot Prairie View A&M (1-3) on the day, going 18-of-36 (50 percent) from the floor; however, with their top two points guards sidelined with injuries, the Colonels committed a season-high 19 turnovers in the game.

A layup by Gary Blackston with less than 30 seconds to play gave the Panthers a 10-point lead at the break, 39-29.

The Colonels cut the deficit to five, 45-40, on a layup by Mayo with 15:53 to play. EKU was still within striking distance when a pair of free throws by freshman Dedric Boyd made it 70-64 with 4:24 showing.

However, Prairie View A&M responded with six straight points to make it an 11-point game with 2:32 left. EKU never got closer than nine points the rest of the way.

Boyd finished with nine points, while Broughton came off the bench to tally eight points. Freshman Cameron Carmical saw his first significant action of the season and responded with a team-best four assists in 17 minutes off the bench.