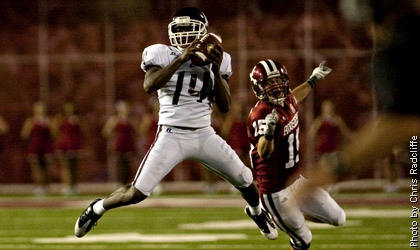 RICHMOND, Ky. – Eastern Kentucky University football player Jeremy Caldwell was one of 20 Division I Football Championship Subdivision (FCS) players named to the initial Buck Buchanan Award watch list today. The award, which is presented by The Sports Network, is handed out annually to the nation’s top FCS defensive player.

Caldwell, a senior defensive back from Chattanooga, Tenn., has gotten his hands on 13 career interceptions, three of which have been returned for touchdowns. Last year at Louisville, Caldwell returned a third-quarter interception 80 yards for a score. The two-time first team All-OVC selection also scored touchdowns on kick-off returns against Southeast Missouri and Jacksonville State, as well as a punt return versus Austin Peay in 2010.

As a sophomore in 2009, Caldwell led the Ohio Valley Conference and tied for fourth nationally in the FCS with seven interceptions.

Caldwell was the lone OVC player to make the initial watch list. The Buchanan Award watch list can undergo revision during the 2011 season. Ballots will be sent to a panel of approximately 200 sports information and media relations directors, broadcasters, writers and other dignitaries following the conclusion of the regular season on Nov. 21.

The Buck Buchanan award is named for Junious “Buck” Buchanan, the NAIA All-American and Pro Football Hall of Fame defensive lineman who played for Grambling State University from 1959 through 1962. As a freshman, Buchanan came to Grambling on an “if” scholarship, to receive financial help if he played well. After a season of playing both varsity basketball and football, Buchanan decided to concentrate solely on football. By the time he finished four years at Grambling, his coach, Eddie Robinson, asserted that Buchanan was “… the finest tackle I have ever seen.”

The Buck Buchanan Award has been handed out annually since 1995. Some of the past winners include Minnesota Vikings’ Jared Allen (Idaho State – 2003), Jacksonville Jaguars’ Rashean Mathis (Bethune-Cookman – 2002) and Dexter Coakley (Appalachian State – 1995, 1996), who played 10 seasons with the Dallas Cowboys and St. Louis Rams.

No OVC player has ever won the Buck Buchanan Award.

The Buchanan Award will be presented to the FCS national defensive player of the year on Thursday, Jan. 5 in Frisco, Texas – the night before the national championship game.

Running back Da'Joun Hewitt was named Offensive Player and Freshman of the Week, while kicker Patrick Nations was named Special Teams Player of the Week. ATLANTA, Ga. – After defeating Western Carolina 31-28 in the season opener, two EKU football players were named...