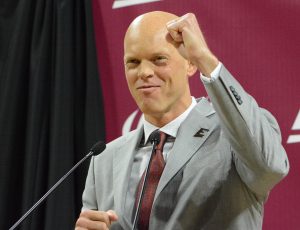 RICHMOND, Ky. (KT) — A.W. Hamilton always wanted to play at Eastern Kentucky University. Although Hamilton never dribbled a basketball at McBrayer Arena, he will get the chance to lead the school he once wanted to play for during his high school career at nearby Scott County High School.

“I would have given anything to come here, but unfortunately, I wasn’t recruited here and had to go to a prep school to play to prove that I belonged at this level,” he said.

Hamilton, who received a four-year contract, was formally introduced as men’s basketball coach during a press conference Tuesday in Richmond. Hamilton served as an assistant coach at North Carolina State for the past two seasons and was head coach at Hargrave Military Academy for 11 years, where he went 237-22 and won a national prep championship in 2016. Hamilton was a standout player at Marshall University and is eager to begin his new venture.

“It’s a dream come true,” Hamilton said. “It’s hard to even put it into words. It’s all kinda surreal still, but I’m so happy. I never dreamed in a million years this would happen, but it did. We’re excited to be here and we’re excited to get things going.”

Hamilton replaces Dan McHale, who went 38-55 during his three-year tenure with the Colonels, including a 16-34 record in the Ohio Valley Conference. Under McHale, Eastern failed to reach the conference tournament.

Hamilton didn’t promise an immediate turnaround but did guarantee the Colonels would compete at a high level.

“I’m not going to promise we’re going to win the OVC championship next year,” he said. “But I will promise, these guys will play harder and with more passion than anybody in the country.”

Eastern Kentucky Athletics Director Steve Lochmueller said the school zeroed in on five candidates and the search party included members of the school administration and several community leaders in the process. Members of the school’s basketball team also were involved in the hiring that took nearly a month to complete.

Lochmueller’s main priority was to hire a coach with head coaching experience as well as “someone with knowledge of Kentucky,” recruit within and outside the state and most importantly, an “individual that was a good fit us.”

“There were people that applied for the job and then there were people that want the job,” Lochmueller said. “You identify real quickly once you cut through the field as to who really wants this job and are they applying for other jobs or is this something they have on their radar screen. With A.W. Hamilton, he wasn’t going to apply for any other job. If he didn’t get this job, he was going to stay at North Carolina State.”

Hamilton kept track of the Colonels throughout his coaching career and became even more anxious once he met the school’s administration.

“The leadership got me excited and obviously being a Kentucky guy, you follow all of the schools, and I saw what was happening here. The job opened up here and I wanted to show (Steve) Lochmueller nobody wanted the job more than A.W. Hamilton. We are just thrilled to be here.”

Now that’s he’s officially in Richmond, Hamilton will be busy assembling a coaching staff and getting to know his players as he settles down in his new home.

“I’ve got to re-recruit those guys,” Hamilton said. “There’s a lot of talent and there’s a lot of good Kentucky talent in that locker room. The thing I like the most about them is that they have great togetherness. They’ve already got incredible chemistry off the floor. We’ve just got to get it clicking on the floor and we’ll do that.”

Hamilton said the Colonels will play a fast style approach on both ends of the floor but will do so with an organized approach.

Hamilton added an overseas trip this summer will benefit both parties even more.

“You’ve got to get them to understand your system and understand trust in the coach,” Hamilton said. “They’ve got to trust me and trust my staff. All of that is a process and it will take time, but We’ve got a unique situation this summer, where we’ve got a foreign trip to Costa Rica, and we’ll get some additional practice time this summer.

“I know how anxious they are. The biggest thing we’ve got to do is get to work. We’ve got to get in the gym and grow together. This will take time, but they’ll love me because I’m going to love them.”

Hamilton plans to recruit this state from top to bottom with a mixture of outside talent from neighboring states.

Hamilton and Lochmueller said the tools are in place for the Colonels to climb back to the top in the Ohio Valley Conference.

“We have to create excitement and we have to market ourselves,” Lochmueller said. “But more importantly, we have to win. We haven’t won in the last three years.”

Keith Taylor is sports editor for Kentucky Today. Reach him at keith.taylor@kentuckytoday.com or twitter @keithtaylor21.

Match your email address to your domain with Hover.com.